I feel SO much better after taking this stuff!  I haven’t been sick in so long I didn’t even realize that I needed to sign off that I was over 18 to buy this stuff!   I got the non-drowsy for the day and then Tylenol PM for tonight.  All I know is that I am able to do things, like grocery shopping, without having to stop and cough.  😀

Our grocery shop went great, I’ll detail in my next post.  Even including $19.99 spent on one ingredient (the 1 pound of lump crab) our groceries came to $152.07, which when you see my menu I think is great!  Not only does that include Superbowl Sunday, but also 7 complete dinners and lunchmeat for Tony’s sandwiches during the week.

So do you ever have a jones for certain things?  Mine is gyros!  I love the fact that they take your pita and fry (i.e. soak!) the pita in butter before adding the gyros meat!   Hannah and I split one, but I ended up taking off 2 ounces of the meat, using my TJ pita and only having 2 ounces of fries, which I of course added Tabasco! 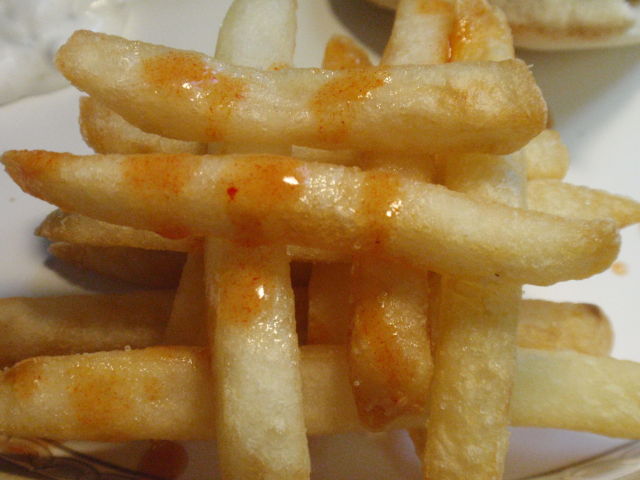 stacking my fries like that makes me think I have more!

I just steamed my pita for  30 seconds and then put in my gyros meat – with 1 tablespoon of the cucumber sauce on the side.  Hit the spot!

Now before I would have had the whole pita, with a large fry by myself.  That version would have been 1185 calories, 64 fat and 83 carbs!  Yikes!

What is your favorite fast food go to?

Off to clean up the kitchen so we can bring in the groceries.  Lot’s to do!  See you later. 😀

Tony loves ham steak but I rarely think to get it.  When I was at Aldi last week I saw it and picked it up – this whole steak only cost $3.25!  I pan fried it in Pam for about 6 minutes a side. 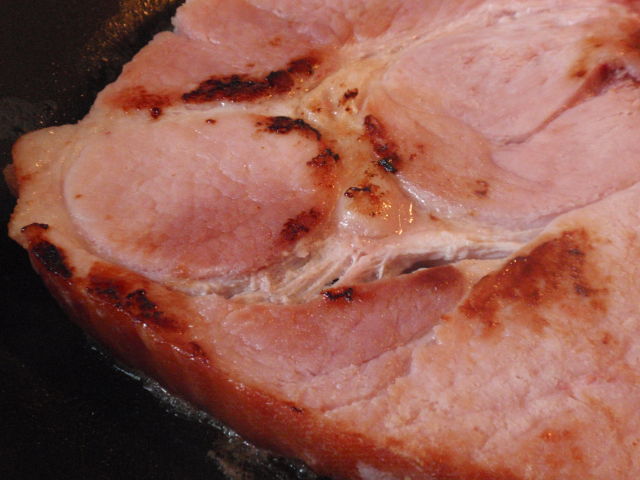 I heated up some premade hashbrowns in the toaster oven, and made us eggs/egg white scrambled eggs.  Delicious! 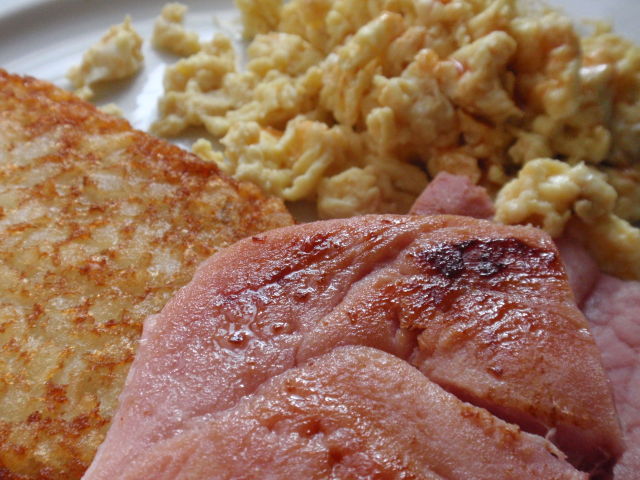 I still haven’t gotten rid of my cough yet!  Thanks for all your suggestions so far though! 😀  I am going to go to the pharmacy today and see what types of cough syrups I can get.  The problem with that is  a lot of them interfere with my blood sugar, so my options are sometimes limited.  The worst part is that I feel okay, so I keep wanting to do things, only to start hacking up a lung!

Yesterday I said I was going to post the recipe for Joe’s Crab and Artichoke Dip from Joe’s Crab Shack.  I had it all wrong – the recipe comes from Joe’s Seafood, Prime Steak & Stone Crab restaurant – big difference!  This is the dip I am making for the Superbowl.  I am also going to be making steak tartare!  Tony and Joe absolutely love it, but I just can’t over the raw meat factor.  You need to get REALLY good meat for this so a trip to the butcher shop is on the list today.

Whip cream cheese until smooth and light with mixer.  Add may and combine well.  Fold in the remaining ingredients by hand with rubber spatula gently until combined well.

Pour into a greased 9×9 baking dish.  Sprinkle top with grated asiago.  Bake in 400 degree oven for 10 to 12 minutes, or until golden brown.  Place under broiler for additional one minute to brown more if necessary.  Serve with your favorite chips: garlic crisps, pita chips, etc.

Okay, I am off to get some relief from this cough!  See you later!

So although I have buffalo chicken pizza on my brain, we just ordered pizza tonight – I didn’t want to get my germs all over everyone’s pizza!   Next week that will definitely be on the menu!

So Tony has been on the internet trying to find home remedies for my cough.  It’s a dry cough, not a satisfying cough if you know what I mean!  Other than that I feel fine!   It’s so annoying!

Next up:  Vick’s Vaporub on my feet with socks.  The results?  Not sure yet.

Now he’s shouting “do we have cayenne pepper and ground ginger?’  I think I need to get him off the computer!

I hope I feel better tomorrow – its football weekend and I have a lot planned!  Off to relax – we just saw Howie do it.  When I laugh that makes me cough too, so maybe we should stick to dramas tonight!

I decided I needed to make soup for my cold/cough/flu whatever I have.  In between coughing fits, I heated up 1 can of chicken broth, 1.5 ounce diced carrots, sprinkle of lemon pepper seasining, Italian seasoning, 2 ounces whole wheat spaghetti and 1.5 ounces of shrimp, and lots of crushed red pepper, which made for a really spicy broth!

I knew I wanted a protein in my soup, but the chicken would take to long to thaw and when I try to defrost meat in the microwave, I always end up cooking part of it!  So I just tossed the shrimp in the last minute until they turned pink.

So while I was waiting for the carrots to cook in my soup, I had to be creative with Tony’s lunch.  It’s the end of the week, the lunch meat is gone, and seriously I think he’s sick of sandwiches by now!   So I looked in my cupboard and found way in the back two small pouches of tuna.  And the tuna melt idea was born!

I don’t like tuna, and when I don’t like things they tend not to get put in my shopping cart!  We’ve been married over 8 years, and I don’t think I’ve ever made him this sandwich before – and I know he likes it!

I just threw in what I thought would work.  The tuna, about 4 tablespoons of Annie’s parmesan and artichoke salad dressing (need to get mayo!), a splash of lemon juice, a sprinkle of lemon pepper seasoning and salt.  I first toasted the bread so it wouldn’t got soggy under the broiler.  Then topped with the tuna and fresh sliced tomatoes: 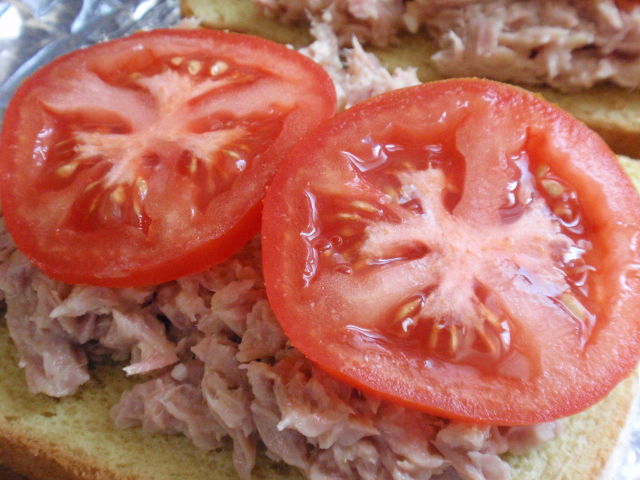 I love how sliced tomatoes look - wish I liked them! 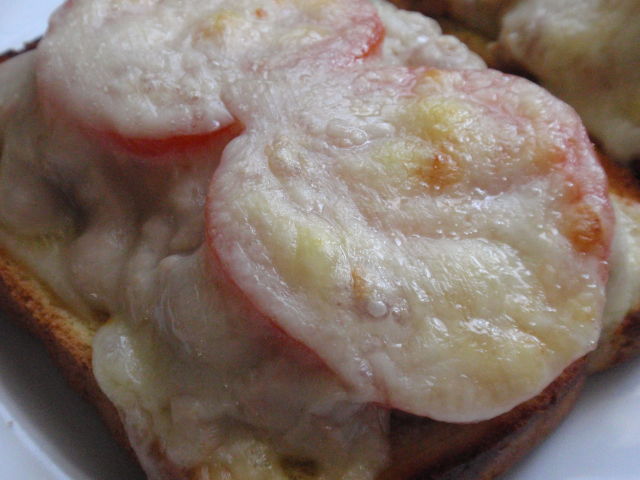 He loved it, and I promise I left the kitchen when I had to cough and I washed my hands about five times!

Now on to more good eats!

Megan made a delectable (and easy) caramel chocolate cake.  You can never go wrong with chocolate!

Stephanie made a mouth watering Pulled Pork BBQ in her crockpot.  I just stumbled onto her site, but it looks like she has TONS of crockpot recipes for anyone else who loves their crockpot – especially in the winter!  Can’t wait to see what else she has on her site!

Aggie made a delicious Mongolian Beef – you know how much I like a good stirfry.  I think even Tony would consider this a full meal instead of my tofu additions!

I could not stop coughing last night and for someone who is usually asleep 60 seconds after putting my head on my pillow AND not moving until the alarm goes off (and I usually don’t hear that!) I think I got about 4 hours of sleep last night.   I am glad I don’t have a sore throat though, I think that’s worse than coughing!

So today is going to be the most boring food you will ever see.  Don’t believe me?  Here’s my breakfast:

Want to see some good eats though?

Cory made an amazing Buffalo Chicken Pizza. In all my pizza party Friday’s, I can’t believe I’ve never made that!

Kevin made a Sweet Potato Poutine, which is Canada’s version of cheese fries I think?  Kevin, let me know if I am wrong about that!

Zesty cooked up some Roasted Cayenne Cauliflower Popcorn.  I just recently tried cauliflower and found that I like it!  Although don’t fall for the low carb trick of making mashed cauliflower because it tastes just like mashed potatoes because it doesn’t!

Robin Sue  made an wonderful Jalapeno Popper Dip!  OMG, what an awesome idea!!  That is definitely on my to do list to make, especially when I am not hacking up a lung!

MaryBeth made the cuttest Posh Piggies.  Perfect finger food for a certain football game this weekend!

Okay, I am off to rest some more.  Come back later for more links to other peoples great food today and I am going to post my recipe for Joe’s Crab Shack’s Crab and Artichoke Dip I am making for Sunday.  It sounds delicious!