Yep, that’s right!  As soon as I took my lunch pics and started to eat, I got the call from Tony to come get him!  Luckily my office has to go cups!

the other "to go" container was strawberries, but I never got around to eating them

So the dog was super excited to see Tony and now they are laying near each other in the living room.  The only time Ed wants to be right next to Tony is when I am sitting next to him and then he lays all over me until I move!   I am sure Tony’s completely exhausted having not slept well in the hospital these last seven days.  Again, thanks for all your concerns and prayers!  We both totally appreciate it!

Since everyone is dying for my soup recipe, here it is – I also accessorized my lunch today, but I’ll explain that later.   Like I said before there are so many roasted red pepper tomato soup recipes, I kind of gathered ideas from them, yet added new things to make it my own.

I chose three of the biggest peppers from my loot 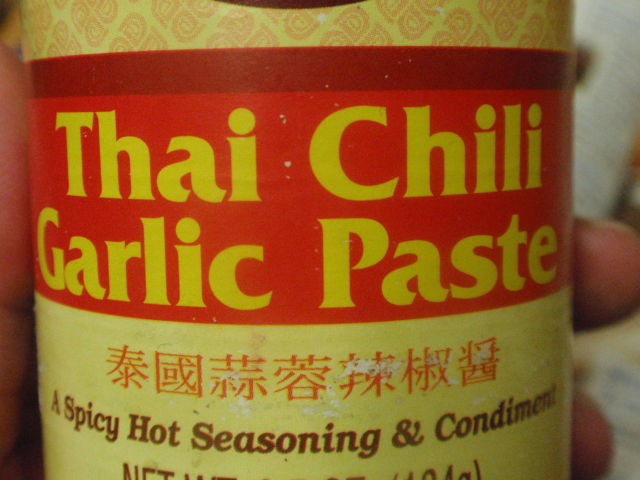 a little of this goes a long way, but it made for a spicy, yet flavorful soup! 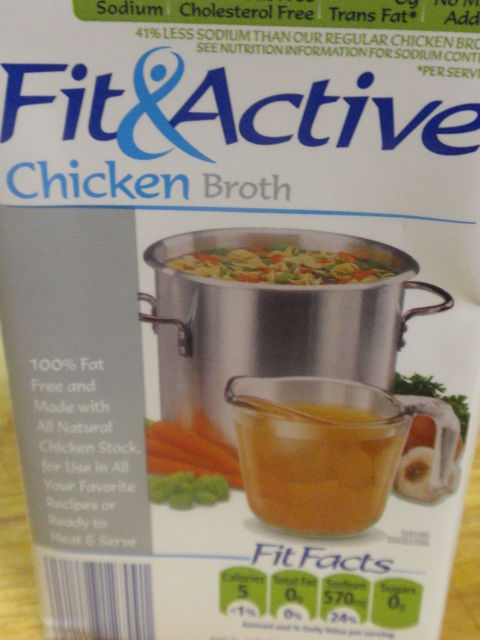 Once broiled, put in a bowl with plastic wrap and let rest until cool enough to handle- 20 minutes or so then put on cutting board to remove seeds and stems

I intentionally left the char on one pepper, because I like the smokiness it gives to the soup.  While the red peppers roasted, I put the tomatoes in a big pot and cooked them down with the garlic.  Once the peppers were peeled, I added them to the pool and added the remaining ingredients, except the soy milk.  I let this cook for about 20 more minutes and then using my stick blender I pureed it right in the pot.

I took one bite and it was WAY too spicy – I couldn’t believe how spicy 1 tablespoon of the Thai chili paste would go!  That’s when I decided to add the soy milk (off the heat).  That added an extra layer of creaminess and cooled the heat just enough.

see the flecks of the charred red pepper??

I also brought cucumber, 2 laughing cow cheeses and the strawberries. When I put it into calorie king, my lunch only came in at like 240 calories – definitely not enough!  So I went downstairs to the cafe in the building and asked for 2 pieces of Italian bread.  The cook came out, handed me the bread and said “it’s only bread, no charge!”  Nice!

So I toasted the two pieces of bread, spread 1 triangle of laughing cow light on each piece of bread, then layered the cucumbers on top with salt and pepper.  This was so refreshing mixed with the spicy soup!  This is definitely a keeper!!

So lunch ended up coming in at 434 calories

Whew, okay, now I can move on now that I know this is posted and Tony is resting comfortably.  Off to do a couple loads of laundry and start dinner.  Come back for Southern Fried/Baked Chicken with Buttermilk Mashed Potatoes and Parmesan Zucchini!

We have so many different kinds of bread in the house right now, I need to start using it up!  Bagels, sandwich bread, english muffins, garlic foccacia!  My breakfast portion was 2.2 ounces.   I toasted it lightly then put 1/4 cup cooked egg beaters, 1.5 ounces Krakus ham and .9 ounces of Alpine Lace reduced fat swiss cheese (i.e. stinky cheese!) 😀 and then put it all together and nuked it for 20 seconds to melt the cheese. 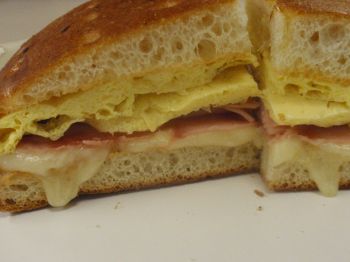 I can’t believe today is the last day of March already!!  You know what that means . . . my first day of the month giveaway is tomorrow and it is no April fools either!!  Can’t wait to share it with you!

Last night I made a spicy roasted red pepper and tomato soup with some of my produce loot – I combined a bunch of different ideas I liked and added some twists of my own, including thai chili paste, apple cider vinegar and soy milk!  Best part though is each one cup serving is only 57 calories!

You’ll have to stop by at lunch to get that recipe!  See you then 😀

I stop by Cathy’s blog www.noblepig.com just about every day.  Her pictures are amazing and even if I’ve just eaten, my mouth begins to water when I see her food.   Today she had peanut butter and jelly chicken wings for goodness sakes!  But the reason I mention her, is because of her site I discovered Cream Puffs in Venice!  She has a regular feature called Magazine Mondays.  She, apparently like me, is a cooking magazine whore and decided that every Monday she would make a recipe from one of her magazines.  Brilliant!   So tonight I am going to send her my link for Magazine Monday.

But first, look at my produce loot!

Definitely going to make roasted red pepper soup and pasta sauce - each package was only $1!

So tonight Hannah and I decided to make the Clean Eating Mac n Cheese out of this months issue.

Here is the photo in the magazine

I actually was able to find this flour! At the same store no less where they had the $11.49 quinoa, this package of flour was only $2.39.

This makes the dish - only 60 calories and 1 gram of fat per ounce and it is still very flavorful!

While the original recipe called for swiss cheese, Hannah's not a huge fan so I substituted 4 ounces of part skim mozzarella and reduced the Cabot cheese to 4 ounces 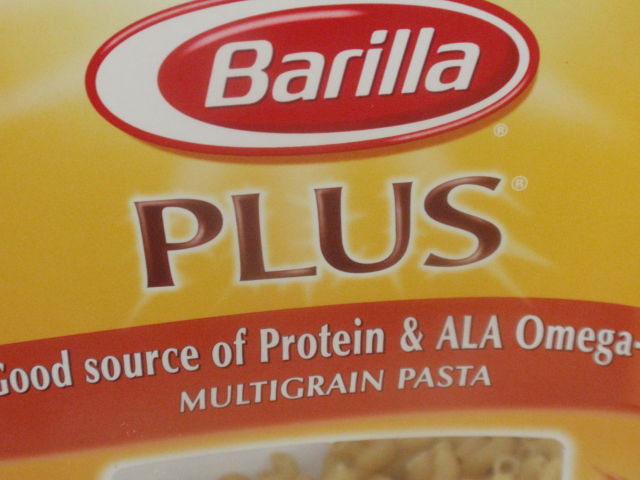 This is the whole grain elbow noodles we used - very good! Sometimes I think whole wheat noodles taste weird, but this was more like the real deal

I removed the noodles when they were very aldante, because it cooks an additional 20 minutes at 375

But look how good the stats are on this! I ended up eating 1 1/2 cups

While it was pretty creamy before going in the oven, it dried up a bit in the oven, which Hannah loved because she doesn’t like an overly cheesey sauce (what?) so with the remainder, I stirred in 1/2 cup lowfat buttermilk to cream it up.  I plan on bringing some to my friend Renee who is the best taste tester!

Off to start my soup and pasta sauce.  Oh, and before I forget, we have a relatively new blogger hosting this weeks BSI – Avocado!  She won last weeks BSI eggs – she actually made a big egg white into a wrap and stuffed it – very clever!!  She’s Ruth over at Plentiful Plants – check out her win!

And as always, thanks for your continued support and concern for Tony!  See you tomorrow!

about Tony yet, except infectious disease stopped by today to say that a tissue that was removed from last weeks surgery has come back positive.  Have no more details than that, but I have to keep doing what I do to not drive myself crazy thinking about it.

So until I know more I am going to try to stay positive!!

1.5 cups homemade brunswick stew - Hannah labeled them so I didn't end up with mystery soup! Doesn't look pretty but it tastes really good!

So send your good thoughts our way!

Tony was able to get around on crutches this morning – so that is an awesome step in the right direction!!   He may be coming home this afternoon, but definitely tomorrow at the latest.  Keep your fingers crossed its today!

Hannah and I stopped by Aldi to pick up coffee creamer – so cheap there!  I’ve told my mom about this dill havarti cheese and she hasn’t been able to find it at her local Aldi.  It was at mine again so I picked up some for her – I’ll just have to remember to give it to her the next time I see her!

But I also found this cheese:

So you know what I had to have for breakfast!

Do I eat in my sleep?  Last night before bed I checked my blood sugar and at 10:30 p.m. it was 126 – not bad!  This morning I woke up and it was 272!!??  How the heck does that happen?  I’ve seen those shows on Oprah where people eat in their sleep – maybe with Tony not being home I am somehow consuming food I am not aware of? 😀

Okay, morning break is over, not sure what the rest of the day will be – I brought lunch just in case I need to pick up Tony today, but its portable – we’ll see!  See you later.