I have a long list of things to do while I am off this next week.  One of them is to organize my deep freeze.  The problem is that its a) huge and b) there are only two shelves otherwise its just a bottomless pit.  While I was contemplating what to do, I realized that we had snow crabs that hadn’t been cooked.  There wasn’t enough for a meal, so I decided to cook them, pick out the meat and figure out what to do with it. 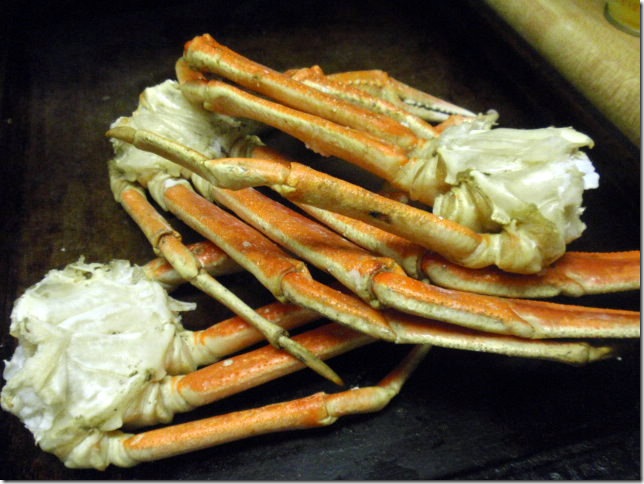 Put crust in pie plate.  Layer spinach and crab over the bottom.  Mix all the rest of the ingredients together and then pour into pie plate.  Bake at 350 degrees for 40-45 minutes.

Since my step-son Joe was coming over, I decided to make crab ravioli.  First I had to start with the sauce.  While Tony and I usually make our sauces from fresh tomatoes, at $1.79 a pound, canned tomatoes would do just fine!  I like to buy Italian plum tomatoes (tomatoes I never even heard of until I met Tony!)

Sauté the carrots, celery and garlic for about 5 minutes.  Add canned tomatoes and simmer for one hour.  Using a stick blender, puree until smooth. 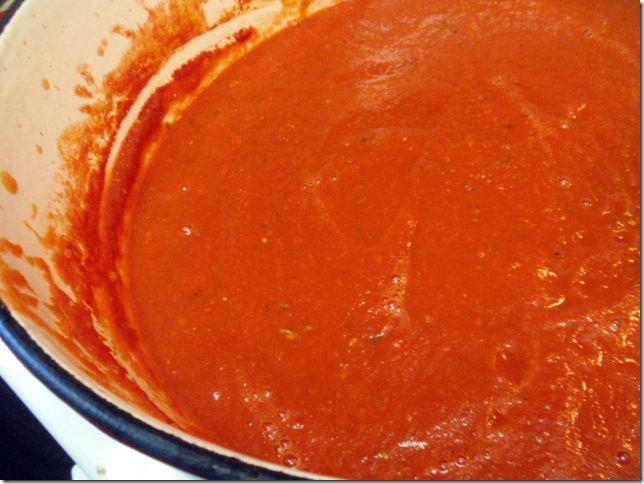 This made about 9 cups of sauce.  Since Joe likes a creamy tomato sauce, I pulled out 4 cups of sauce and added one pint of heavy cream and 1/2 cup of Parmesan cheese.

So once the sauce was done, I decided to make my crab filling!  I bought this can of crab meat at our local grocery store – $9.00 a can.

Since its lump crab meat and hand picked, you still need to make sure there are no shells!

Mix all together and put in refrigerator until ready to use.

Before I moved onto the dough, it was time for Man Food! 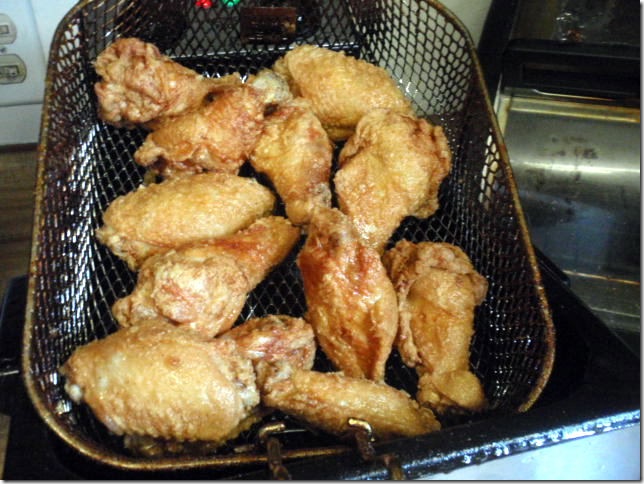 Joe and Tony both like mild wings.  It’s so hard to judge though since Tony believes I have burned all the taste buds with all the hot shit I have eaten over the course of my life!  I mixed a ratio of 6 tablespoons butter to 1/4 cup Frank’s Red Hot Sauce.  They were deemed wimpy!  But they still loved them! 😀

I had Lady Like Food for my lunch!  I made the Roasted Butternut Soup with Goat Cheese Crostini from December’s Cooking Light.  Don’t skip the goat cheese crostini – it makes this soup!

Bake the cut squash on a cookie sheet for 30 minutes at 400 degrees.  Cool and scoop out pulp.  Meanwhile, add oil to stock pot, add garlic and sauté for 2 minutes, stirring so they don’t burn.  Add squash, vegetable stock, potatoes and salt and pepper.  Simmer for 45 minutes or until potato is tender.  Using a stick blender, puree until smooth.  Toast bread and then top with goat cheese.  I loved the addition to goat cheese balanced against the sweetness of the butternut squash!  It’s slightly sweet, then you get the tanginess of the cheese = YUM!  This serving comes in at 292 calories, 10.1 fat, 47 carbs, 5 fiber and 7.3 protein.

Next time I think I’ll sprinkle goat cheese all over and ditch the bread! :D  The goat cheese makes this soup!

So then it was time to make the dough for the ravioli.  I love youtube because you can watch people make things – I am so much better at attempting a recipe after I’ve watched someone do it rather than reading a recipe!  So I watched a tiny Italian grandma make pasta. And while she was hard to understand, the basic principal is use semolina flour, and for each pound of flour you need to use 2 eggs.  Then she adds warm tap water as needed to get the right consistency.

So far so good!  I had two pounds of flour so I added four eggs. 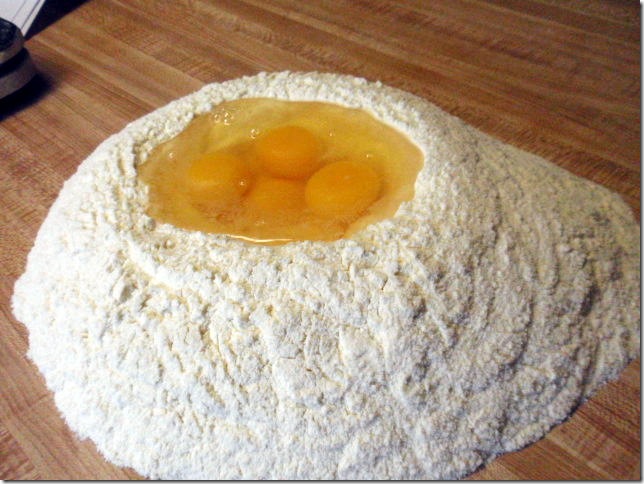 After five minutes though, this is what evolved!

I resorted to bringing up the stand mixer and did the rest using my dough hook – I ended up adding about 3/4 cup of water in total.  Then rested the dough in a bowl that had olive oil in it.  I love this dough!  So simple.  I love how it never lost its texture even after re-rolling it over and over again.

I rolled out one big sheet, then dropped tablespoon sized amounts of the crab/cheese mixture, then folded the dough over the crab.  I don’t have a fancy ravioli cutter, so I used my biscuit cutter and it worked fine.  I pinched the sides closed, then used a fork to make it pretty. 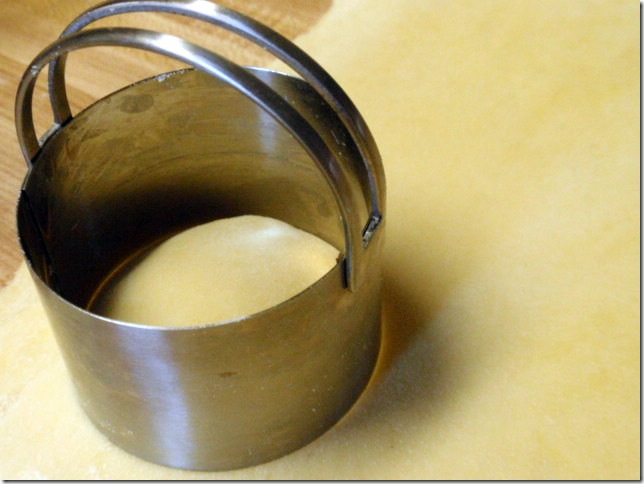 It made all these, plus 7 more which are just cheese for Hannah – she doesn’t like crab!  Since they are fresh, they only cook in five minutes.  If you go from freezer to boiling water, it will take 10-12 minutes.

Before I made them all up though, I needed to make one to see if the seasoning was right – Tony happened to be in the kitchen and was like “the fryer is still on?!”

So Tony tried a fried ravioli:

And Joe had a boiled one:

The verdict?  Just needed more salt, but other than that, they loved them! 😀

Stats for the Day:

Weigh in is tomorrow – looking forward to seeing what the scale says after eating all this delicious food! :D  See you tomorrow night!

31 thoughts on “Love Bizzy Days in My Kitchen!”