It has come to our attention that we have A LOT of food that needs to be eaten!  From stocking up over the holidays, etc., we have decided to eat what we have before going to the grocery store – I plan on spending about $30 on fresh fruit and vegetables, but other than that, it’s using what we have – you may see some interesting meals!

Tony is just happy that we happen to have king crab legs in the deep freeze! 😀

I have had a jones for biscotti!  I had half a can of pumpkin leftover from my pumpkin pancakes, so that was the base.  I had craisins in the pantry – one thing I didn’t have?  EGGS! So I decided to see if I could make them without – I had 1/2 a can of skim evaporated milk leftover from the brocoli/cheese potatoes, so I used that as my liquid.  The verdict?  They were delicious!

Preheat oven to 350.  In a large bowl, mix together the flour, baking powder and salt.  In smaller bowl, mix all the remaining ingredients.  Add to flour mixture and mix just until combined. 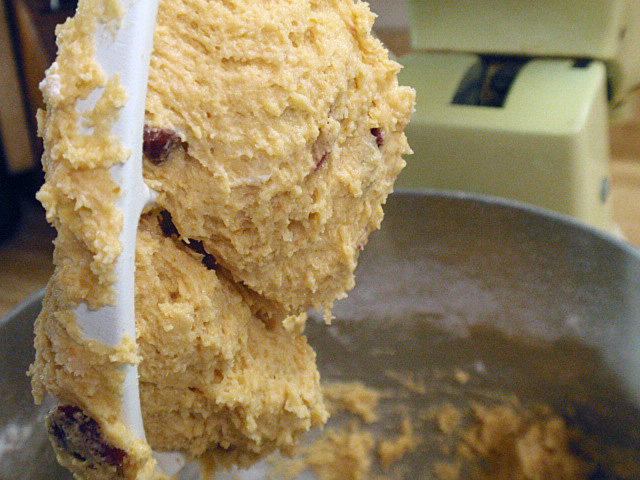 the dough will be slightly sticky

Shape into a log and bake for 25 minutes.  Remove and let cool 20 minutes.  Cut slices and put on cookie rack on top of cookie sheet and bake an additional 20 minutes.  The one thing I forgot to do was to push down the center as it puffs up when cooking – but they turned out great! 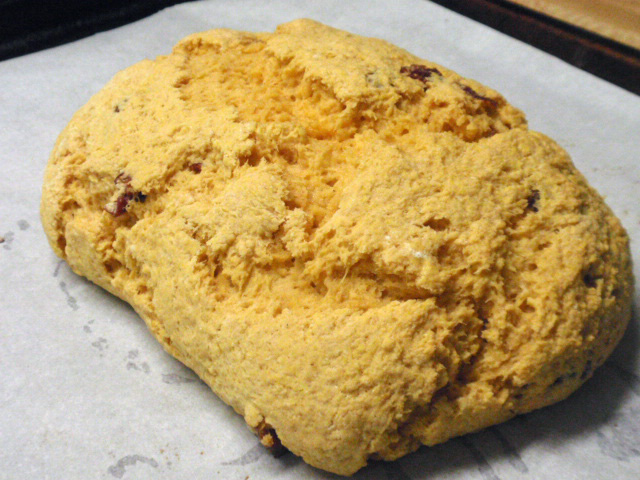 out of oven - resting for 20 minutes

Since we didn’t have any eggs yesterday, I ended up having a container of 0% Fage, 2 ounces of Sophia’s awesome granola with 1/2 a banana.  I can’t even remember the last time I had a banana!

Since I had cooked Smart Taste pasta, and leftover chili, and an opened can of black beans, it was chili 3 way for lunch! 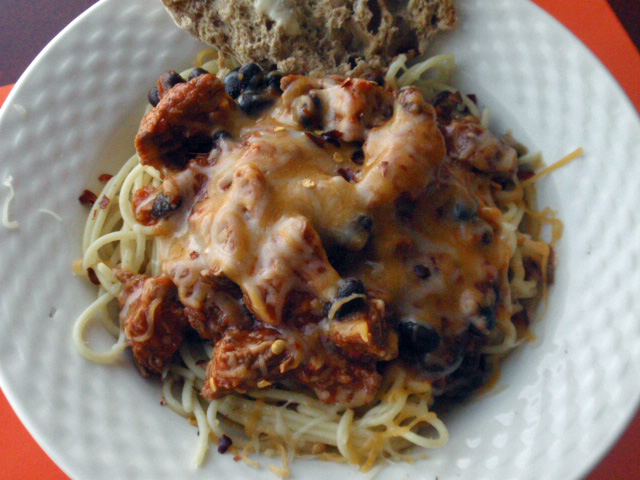 Our office recently got a cappuccino/espresso machine, so I decided on coffee and my biscotti for an afternoon snack:

Before dinner Tony and I split a beer – Boddingtons – which is the best canned beer!  Remember when I told you I got Adobe Elements Photo software?  I am slowly figuring it out – but this effect is called “fresco” 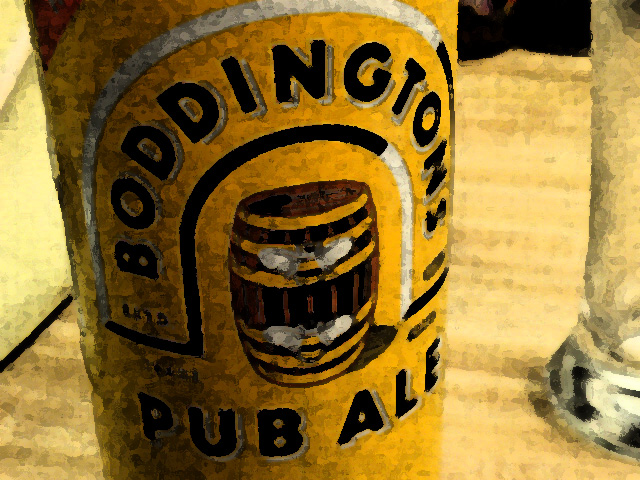 Anyway, I have to laugh at myself, because while I always enjoy party pizza Friday, um Tony?  Not so much.  So I kind of say “what do you feel like for dinner?”  His response?  “I know I am getting pizza, so why do you bother to ask!”  Well last night, I used my inspiration from my pantry and freezer and decided to make Mexican pizza!  I’ve made this before, with my base being refried beans mixed with enchilada sauce – two things I didn’t have, but I had canned black beans and salsa!

I used a different dough recipe – from Chef Novelli from the Bravo show Chef Academy.  But I am not sure the directions are right – it called for 1 pound of flour and 4 cups warm water – it was like flour soup!  I had to add another pound of flour to get it the right consistency!  My secret – at the end I always add corn meal and the dough doesn’t stick to the sides while kneading in the stand mixer.

I sectioned off 1/3 of the dough for our pizza – I liked how it felt!

I used my stick blender and combined 1/2 cup of black beans with 1/2 cup of salsa for our base: 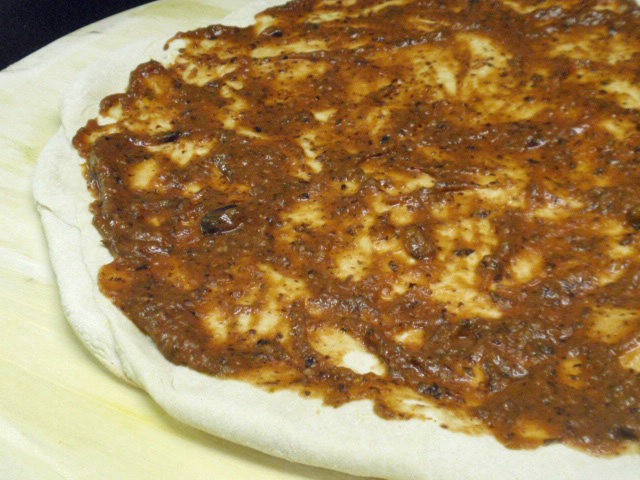 I had frozen ground beef, so while the dough was kneading in the stand mixer, I made taco meat, which was the next layer: 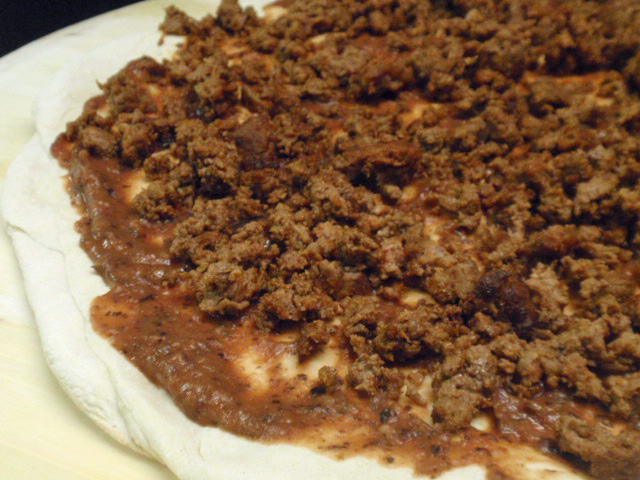 Next layer was from the pantry: corn and sliced canned potatoes, which I tossed in cumin: 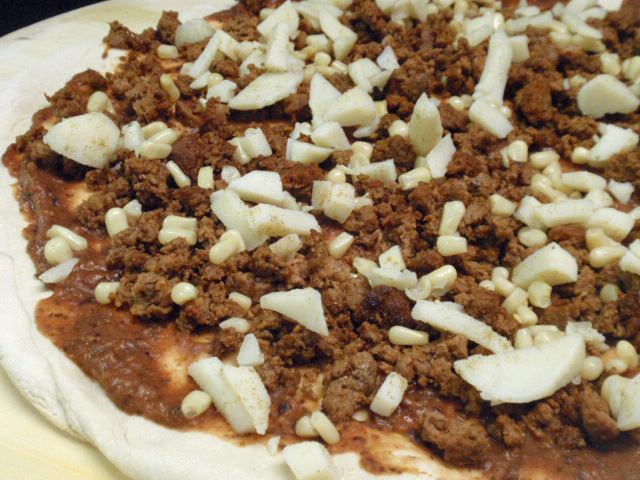 Then I dressed it up after it came out of the oven!  Final layer – shredded lettuce, crushed tortilla chips and pickled jalapenos – can you tell which side is mine? 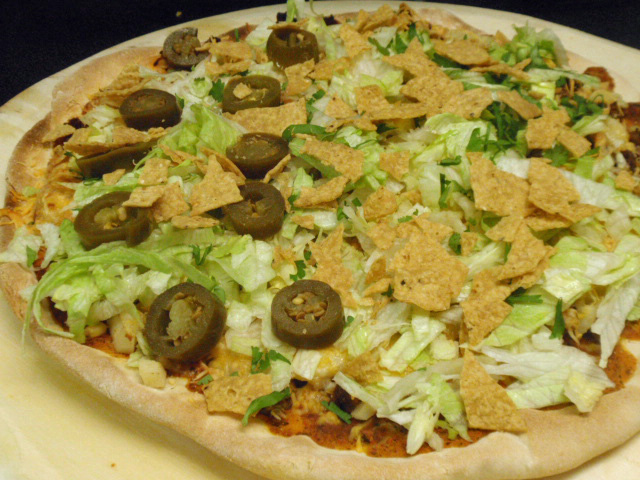 I mixed 1/4 cup fat free sour cream with 1/4 cup taco sauce and put a dollop on top of my pizza – delicious!

Plans for the Day:

And maybe shovel the deck? 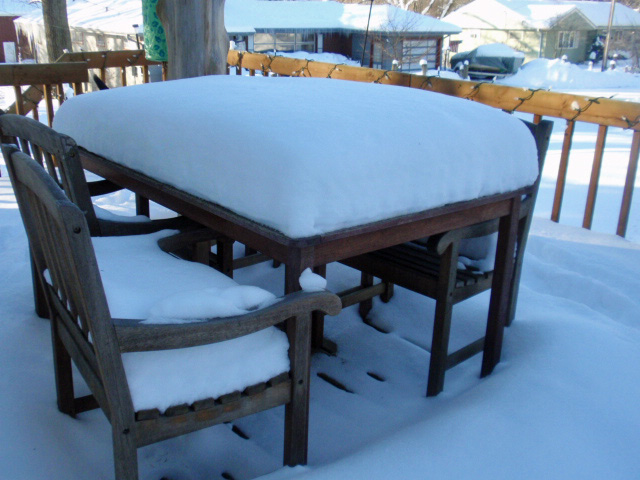