Yesterday was all about comfort food, and when I uploaded my pictures – turns out CHEESE was the star of the show yesterday!

I made Noble Pig’s Bloody Mary Soup before work yesterday.  Oh.My.God.  Best soup ever!   I knew I wanted to make a grilled cheese sammie with it, so I decided to stop by Panera bread on my way to work and accessorize my bread – hands down their sourdough bread is AMAZING!.  I’ve made grilled cheese sandwiches before for my step-son and I think using that bread is his favorite grilled cheese ever.

I asked the girl to slice it since our knives at work aren’t that great.  So breakfast was my apple/sharp cheddar on toasted sour dough with a 0% Greek yogurt with some of Sophia’s granola that she gave me for Christmas – I still have about 1/2 cup left Sophia! 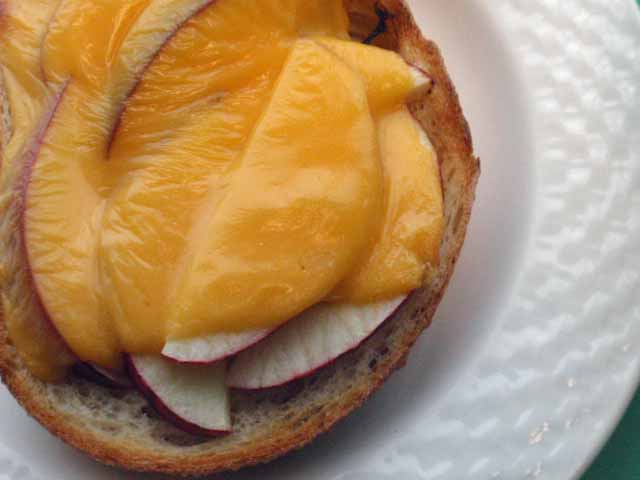 You’ll have to go to Cathy’s site for the bloody Mary soup recipe, although I did make two minor adjustments.  I left out the onion and added 1 tablespoon of Tabasco! 😀  I also used two cans of these tomatoes, since I had them in my pantry:

I first sweat the onions while I was blogging yesterdays post – its all about multi-tasking! 😀 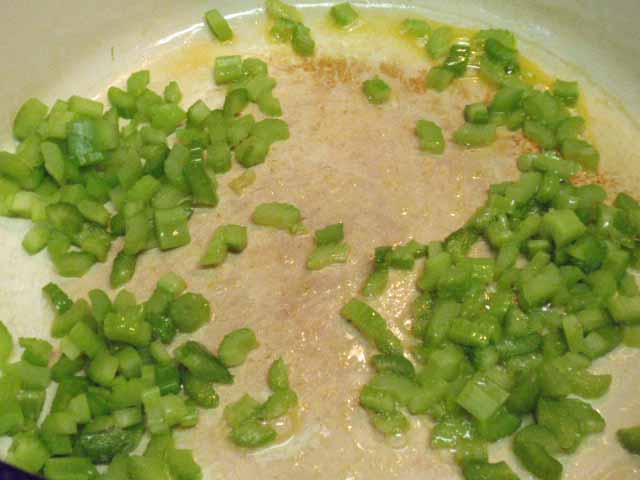 It’s funny, Tony and I are on the fence with celery because of the onion factor.  We’ve both eaten soups before and looked at each other and said “is that celery or a fricken onion??!!”  Since I knew there were no onions, and I was going to puree the soup, I didn’t chop them too fine.  You just throw everything else in the pool, let it simmer, and 20 minutes later you have delicious soup!  I had horseradish cream from when Tony and I went to the Seigelman’s deli, and that brought the whole soup together. 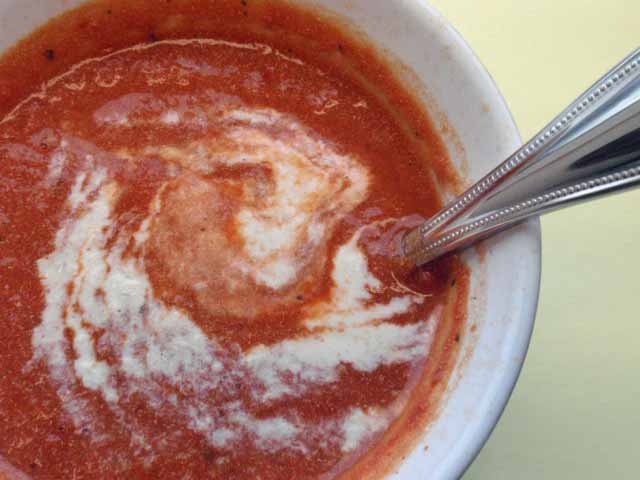 And I made a sourdough bread grilled cheese on the side – sadly I mistakenly figured that each slice of bread was an ounce.  When I got home I weighed the bread and each slice was two ounces! I then realized the girl at Panera must have used the thicker slice when she cut it. 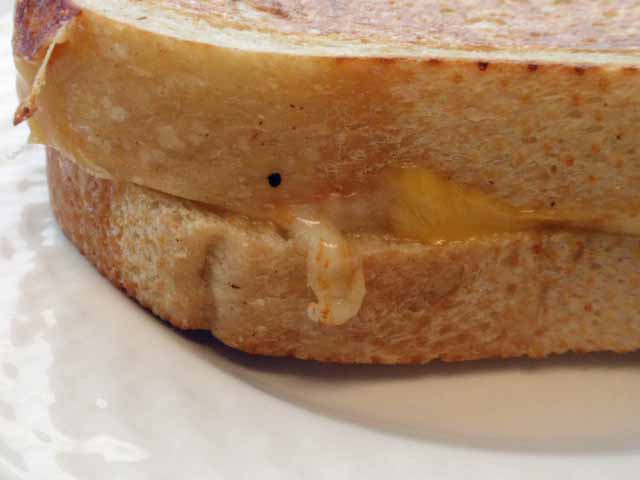 I had an ounce of cheese ends from my grocery store deli on the inside - a mix of American, cheddar and muenster

The best part about grilled cheese and tomato soup is dunking the sammie in the soup!

Thanks again Cathy for posting that tomato soup recipe – the flavor combination is amazing between the kick of the horseradish and the saltiness of the Worchestershire sauce – a keeper!

I had ground beef I needed to use up, so I decided to make patty melts on, you guessed it, more sourdough bread!  Although this time I sliced one slice in half.  My patty melt: 2 oz. sourdough bread, 4 ounce burger, 1 ounce cheese ends, dill pickles and 3 ounces of Ore-Ida extra crispy fries.

First I Pam fried the burgers – I let them get a nice crust before flipping: 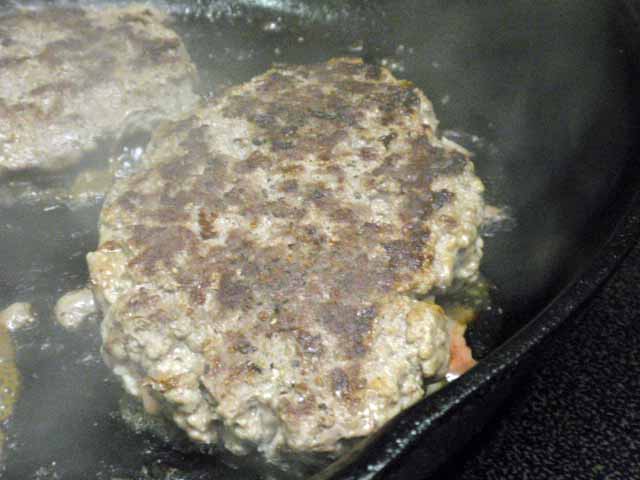 After the first flip I put the pickles and cheese on (no pickles for Hannah!) reduce the heat to low and put a top on it to let the burgers cook through.

Hannah's is on the left with her favorite cheese - muenster! Mine is the lower right and Tony's is in the back

While the burgers were cooking I buttered my bread – but with Smart Balance butter that is only 5 calories a tablespoon! 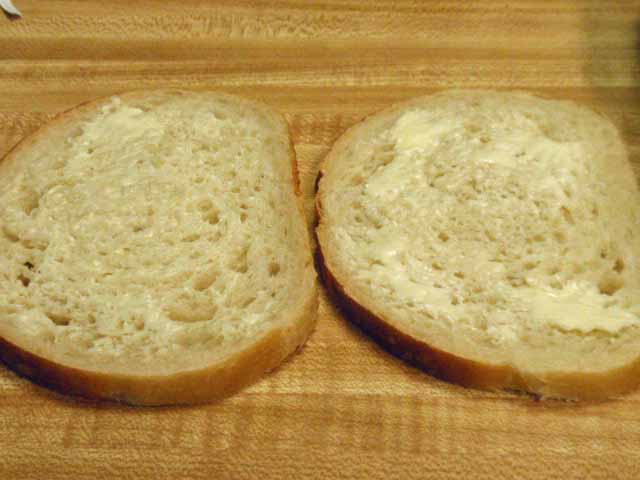 Then I cooked up our patty melts – since the cheese is already melted, this step went by pretty quickly.

love all the melty cheese! 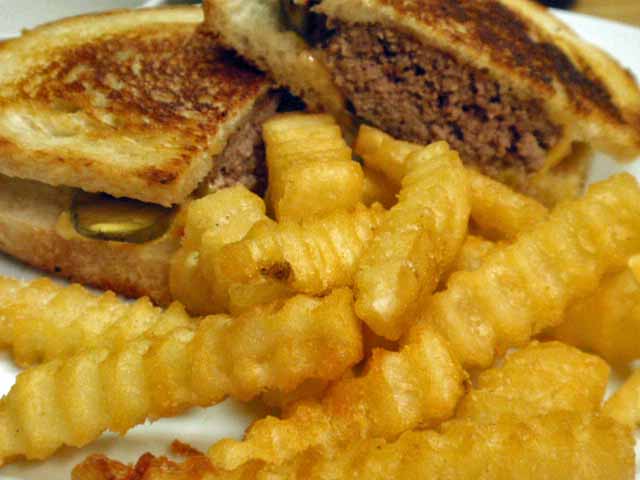 So since I was way off with the sourdough bread, I thought my day would have been about 2200 calories!  But luckily, it wasn’t!

So excited for our work lunch today – we are having a chili pot luck of sorts!  I suggested bringing in chili in honor of the Superbowl this weekend, and everyone offered to bring other stuff.  Be sure to come back tomorrow for my Buffalo Chicken Chili recipe! It gets a grade of A from CalorieCount!

A big thank you for all who voted for my domain name – seems almost like a tie between mybizzykitchen and biggestdiabeticloser.   You’ll find out over the weekend which one I picked!

Oh, and you have until February 28 to vote for my recipes for Foodista’s blogger cookbook – I know you have to sign in to vote, but if you could vote for me, that would be awesome!  Just click on the vote for me widgets on the right side of the blog.