What a wonderful weekend we had.  The weather was amazing, and I was really bizzy in my kitchen this weekend.

I forgot to tell you yesterday that the flea market we went to on Saturday was pretty gross – I mean like worse than some garage sales.  But I did get a new fish spatula and some Greek seasonings, but other than that it was a total bust.

I had to have a pretty tight game plan because not only did I have to prep the food for my SIL’s Mexican fiesta yesterday, I also had to prepare her lunches for the week too.  So I split my tasks in half – did about 3 hours of cooking on Saturday and did about 2 hours on Sunday – not too bad. 😀

I want you guys to know that I really love my family who came over because otherwise you’d never see this in my house.  Ever.  I carmelized onions! 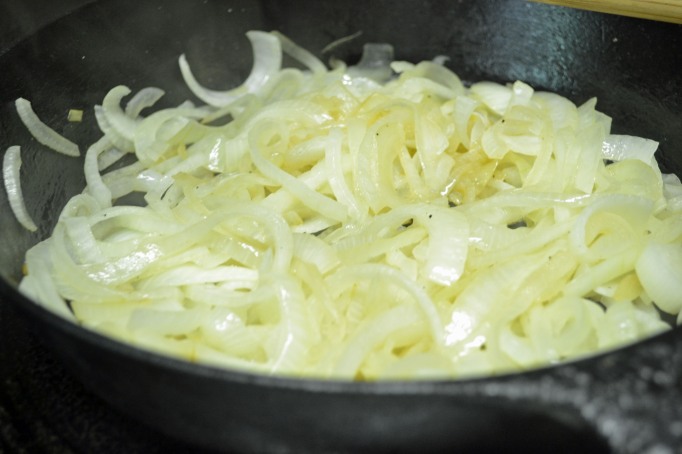 I also sauteed up some really good peppers – love the colors. 😀 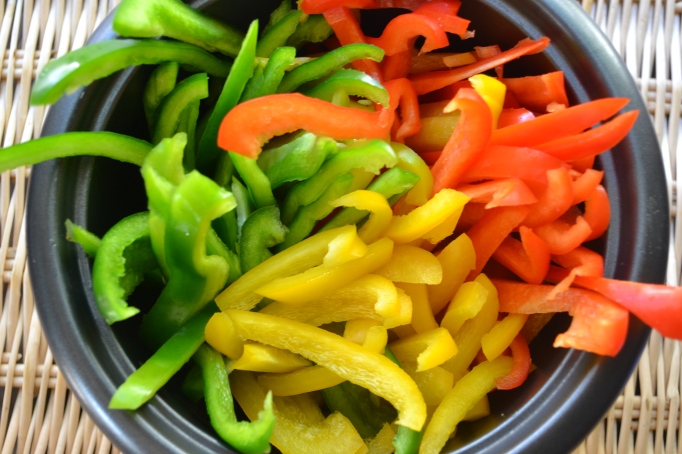 Tony grilled up my cherry salsa ingredients – thanks Tony! 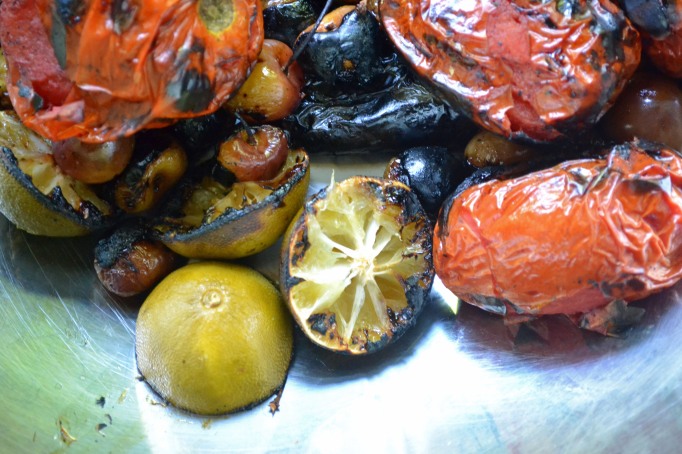 I went to the farmers market yesterday and bought 2 big bunches of basil for $2.  I made a bruschetta with garlic toast – so garlicy good.  I don’t really have a recipe for it, I just add tomatoes, garlic, balsamic vinegar, olive oil, basil and asiago cheese and keep tasting until it I like it. 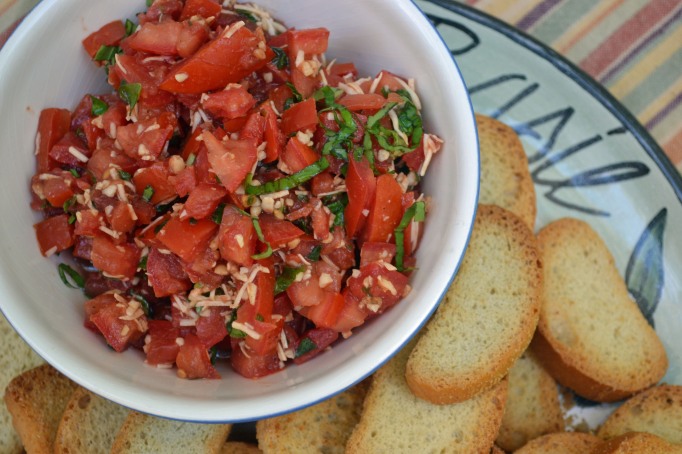 I am not a baker at all, but when I saw Veronica’s coconut poke cake, I knew I could recreate it.  Although I baked mine in a bundt pan.  Somehow I am missing my second 8 inch cake pan – I’ll need to replace it.

The secret to her cake is that a:  it’s a cake mix (can’t really screw that up!) and b: when the cake first comes out of the oven and is hot, you poke holes in the cake and pour a can of cream of coconut over the cake until it absorbs.  Don’t use coconut milk because it isn’t the same.  I thought I might have a hard time finding it, but sure enough it was right next to the coconut milk. 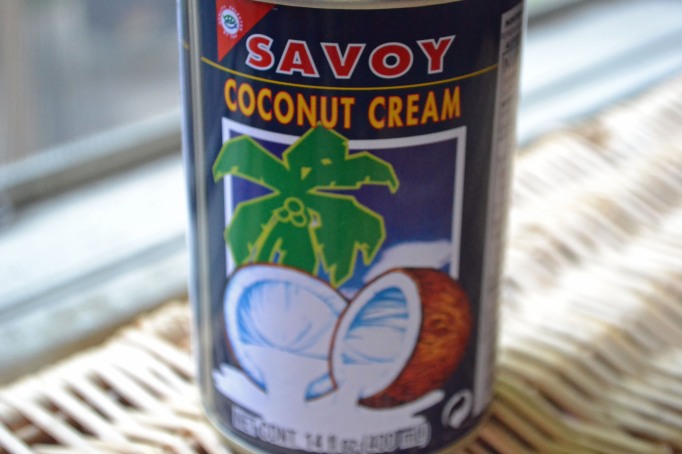 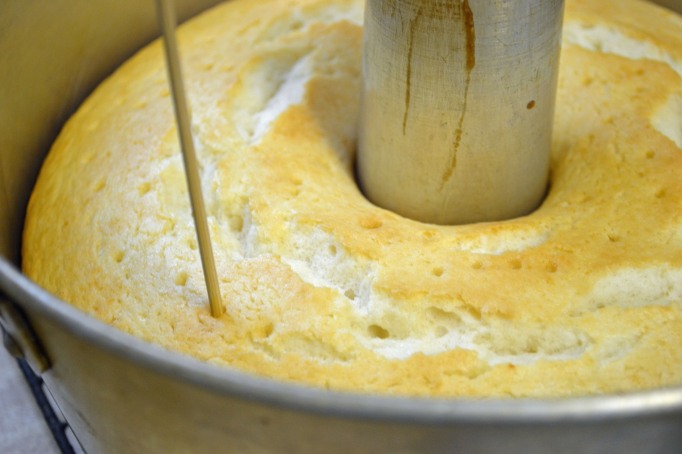 For someone who doesn’t bake too much, I think it turned out pretty good. 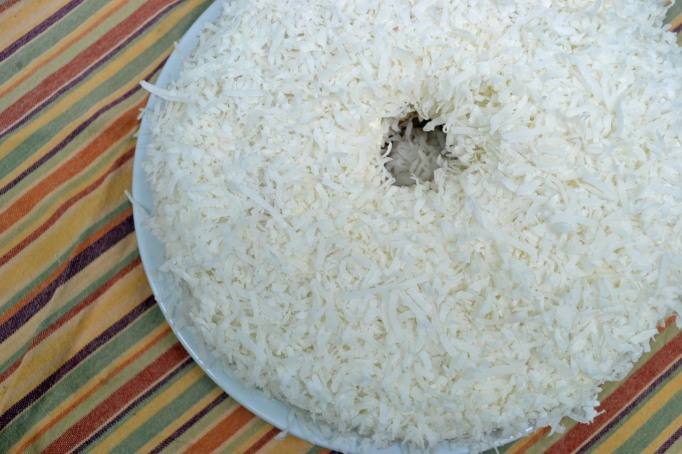 But I have to say that I think this Mexican shrimp cocktail I made was my favorite dish of the day.  I found the recipe here, and made only a few changes.  I reduced the lime juice to 1/3 cup (which was 2 limes for me) and I used the zest of both limes.  I ditched the 1/4 cup chopped green olives and 1/4 cup chopped white onion and used only 1 serrano chile, which was just enough heat so everyone could enjoy it.  And while this is considered a Mexican seafood cocktail in the original recipe, I only used shrimp – feel free to add a combination of crab, squid, etc. 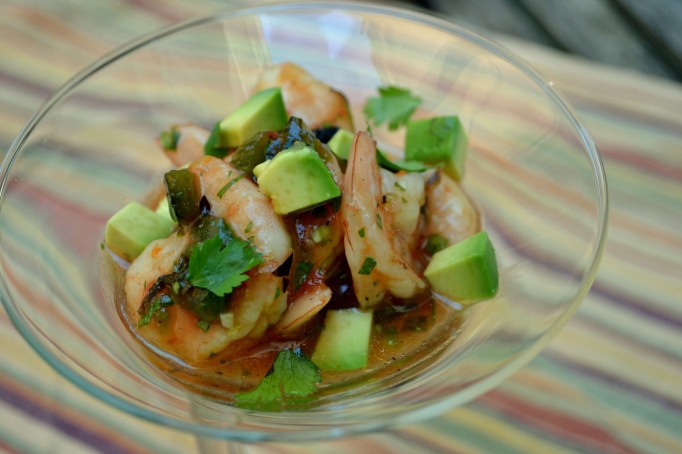 This was such a great combination of flavors – and Tony wants me to make it again, so it’s definitely a keeper. 😀

And after everyone left and I cleaned half the kitchen (I had to run the dishwasher twice last night!) Hannah and I went on a 50 minute walk – one of my goals is to only take one day off from exercise a week, and that was this past Saturday.

While I didn’t count points yesterday, I don’t think I did too bad – the running total in my head is around 40 points.  Hope you had a great day Jody!  By the way, my SIL Jody has lost over 16 pounds on WW so far – this past week she lost another 2.2 pounds!  I like to think its because of my delicious lunches I provide for her, but it is all her – keep up the great work!

It’s Monday again, so I have to get ready for work and pack my gym bag – I am either going to run a 5k or bike at lunch today, haven’t decided which yet.

Did you have a great weekend?  Make it a great day!