Usually once Tony goes into surgery I find my spot in the waiting lounge and spread out.  I have my phone, my coffee, my magazines.  I am there for the long haul.  Tony was the last scheduled surgery for his doctor at ten, so I had no idea how long the surgery would take, and the nurse didn’t know.

So when other people started crowding my space I gave them the evil eye as if to say “hey, I have a right to spread out, I am going to be here for hours!”

Hannah gave me one of her Fiber One bars and I had that before we even left the house at about 6:45 in the morning – I had no idea these bars have 9 grams of fiber and really taste like a candy bar.  I had that and a cup of watermelon in the waiting room for a 3 point breakfast.

So imagine my surprise, when I didn’t even finish a cup of the complimentary coffee they offered, and his doctor came and told me all was well.  It had only been 30 minutes people!

Of course, time still goes by slowly.  Another hour or so in recovery before I could go back, and more time to do post-surgery vitals, etc.  Then the vacuum pump kept setting off an alarm.  So more tape and 60 minutes later, we were good to go home.

I am not going to lie this will take Tony some getting used to.  He has to wear it 24/7 and home health care comes 3 times a week to maintain it.  It could be attached to him from anywhere to four to eight weeks. 😦  But, like we always do, we’ll make the best of the cards we are dealt.

And leave it to my engineer husband to figure out that the machine shouldn’t be making so much noise.  A quick phone call to the manufacturer, and Tony was able to figure out there was a leak, contain the air leak and now the machine is almost silent.  You are so smart Tony. 😀

I had packed a sandwich and some sweet and spicy cucumbers to eat, but once I got back in the recovery room, just something about eating around all the machines and sanitary stuff, I opted to wait.  Kinda like when Kramer drops a junior mint in the operating room:

My sandwich was thin rye, with 2 ounces of deli roast beef, 3/4 slice of baby swiss, spinach and lots of mustard.  Since I was home by the time I ate it, I Pam fried it – the sammie comes in at 6 points.

And while the sandwich was delicious, the star of the plate were the sweet and spicy cucumber chips.

Mix everything together – they taste best when you eat them the next day – gotta love sweet and heat! 😀

While Tony was resting, I decided to make some muffins for the nurses at the surgeon’s office.  We’ve been dealing with them for just a year now since Tony’s colon cancer, so I thought I’d drop some off on the way to work this morning as a thank you.

I ended up making these muffins, except adding 1/2 cup of milk chocolate and 1/2 cup of dark chocolate chips to the banana batter, left out the flour but added 1/3 cup chopped pecans to the crumb topping.  Um, lets just say I licked my finger through the batter and these are amazing.  I hope they enjoy them. 😀

And since Tony is the kind of patient who doesn’t want (although I want to hover!) constant attention, I ended up doing a TaeBo video that Helen gave me – the DVD I did was DEDICATION and it was 45 minutes of strength training.  Holy shizz, this was hard!  But it felt good to move after sitting all day.

When I saw Nicole made potato skin veggie pizzas I knew they would quickly make it the top of the list of things to make.  That is, until I scrolled down and saw the 90 minute time – but realized it was very little actual hands on time.  So while I did my workout, I baked the potatoes.  While I got into comfy clothes and let the potatoes cool to touch, I scooped them out and sprayed them with Pam and a bit of sea salt and baked an additional 8 minutes BOTH SIDES.

Then I added my sauce, red pepper and spinach and baked an additional 15 minutes at 400.  I decided to eat both halves BECAUSE BOTH HALVES WERE ONLY 6 POINTS!.  And since they were only 6 points, I added 3 ounces of sorprasetta salami at the end – dinner comes in at 9 points.  As Ally said my second favorite food group is pizza, and this was a total comfort dinner. 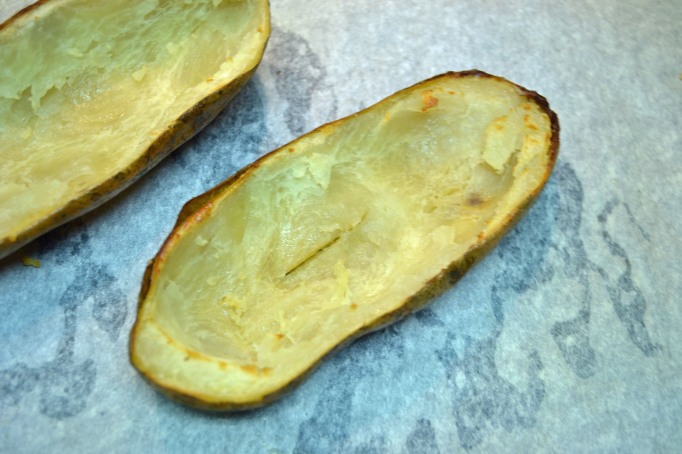 The skins were so crispy, you would swear they were deep fried. 😀 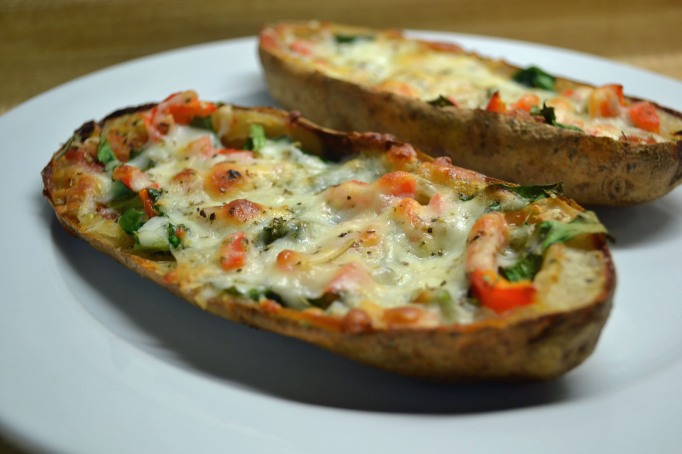 These were so delicious – thanks for the idea Nicole!  My only problem yesterday?  I only had 22 points (I had 1 oz. of pretzels not pictured) and I worked out hard for 45 minutes.  Looks like somebody gets a few more points today! 😀

Alright, I am off like little red riding hood to deliver some muffins – make it a great day!

48 thoughts on “Shortest Surgery Ever . . . and Sweet and Spicy Cucumber Chips. . .and Potato Skin Pizza”