When I was a younger man I fell in love with a taco. Not just any taco, but the Jack in the box taco. Greasy, crispy and devoid of any nutritional value. That hot little goodness laid on top of any alcohol that I had consumed like a trusted blanket. The local Jack in the Box was a place for everyone to go for food, fights and fun. It was open later than other places and it was a natural gathering place for those of us intent on wasting our youth.

In those days I was very active. Sports, mostly pickup games were common. Food for me was just something I needed to keep this machine running. I looked for mainly speed and volume. The local Chinese buffet feared me, I was amazing. In my memory this taco was the only thing I treated like a lovely women. I caressed it as I ate it.

Years passed, Jack in the box left Illinois. I forgot about my beautiful taco. I moved on. My palette now enjoyed sushi, and other expensive and exotic foods. I became friends with a guy who moved to Chicago from California. If you know anyone who has moved from anywhere on the west coast to Chicago, you will hear this every other day. “It never gets this (enter any of the following here ((cold, windy, rainy, snowy etc.)) in California”. Yesh, give it a rest. California has several issues. Firstly, people form California live there. Lots of them, far too many of them. Also they all own cars. They drive these cars everywhere and traffic sucks. They don’t have a good mass transit system, so anywhere you want to go takes hours.

So my friend did what all Californians do, he moved back to California. He invited me for a visit. I met his friends, a great group of folks. We had lots of fun going out to different eating and drinking establishments. One night after being over served I went with one of the gang to get something to eat. That’s when it happened! I saw her again, my first love. We stopped at Jack in the Box, and wham. I ate a taco. It was like being in the back seat again with and old girlfriend. She knows just where and how you like to be touched. That taco had me at the first drop of grease dripping from my hand. I had forgotten you, and I wouldn’t do that again! I traveled a lot in those days, and I always looked for the sign. The beautiful sign that always meant hey, I’m here and I miss you. That round headed, smiley face sign.

One day, I was listening to the radio. The DJ was a huge fan of the taco. In fact he would drive to the nearest JITB location and buy 50 of the taco’s, freeze them and fry them as required. It was then, my world was rocked! Burger King had a knock off of the JITB taco…Huh. This was a revelation! I drove quick as I could to the nearest Burger King. There it was, on the drive through menu. two tacos for a buck. Give me 20!! They were awesome. Just like the JITB, greasy and wonderful. I then took Biz, and to my amazement she loved it too. I don’t think it was sexual for her, but she really liked it! Oh boy, both of my loves in one place…It was bliss. In what can only be known as a marketing guffaw, Burger King no longer sells the tacos. I have calls and emails into all BK execs in an attempt to rethink this horrible mistake.

While perusing the internet I found a copycat recipe. We made them and it was pretty darn good. Not JITB quality, but in a pinch they were fine. The other day Biz calls me and says she has a taste for my much loved taco. Hurray I squealed, taco night. I should have known better. I should have gotten involved, but I trusted her. She did not follow the recipe. Utter disappointment. I was crushed. She made a healthy version; she put beans in my darling taco. WHY, WHY do this horrible thing?

I will make the tacos this weekend. I will follow the recipe to the letter. I am not sure if I will share them with Biz. I will have to see if she can earn them!

Here she is in all her glory! Simply beautiful!!

Here is as link to the recipe:

Thank you Tony, for this guest post and for the record, you can make me tacos any day of the week!

So my breakfast yesterday was amazeballs.  I like to think of it as a Green Monster Quiche!

Slice the potato in rounds and cover the bottom of your pie pan.  Put everything else but the cheese in a blender (I used my smoothie maker!) and process.  Pour into pie pan over potatoes.  I have one boss who loves goat cheese and another who hates it, so I put 1 ounce of cheddar cheese on one side, and 1 ounce of goat cheese on the other.

I normally bake my quiches for 45 minutes at 350, but I didn’t have that much time, so this cooked in 30 minutes at 400.  It was a win because it was breakfast for me and my one boss, and lunch for my other boss, and I still have one slice left for my breakfast today.

I had the goat cheese slice.

I will definitely be making this one again.

I had a cup of cantaloupe on the side.

Since I was still moving shit around my office, I didn’t want to run the risk of having low blood sugar I ended up not taking any insulin at breakfast and that worked – my blood sugar was 230 before working out.

Here is a picture of me before working out:  Not too bad!

But then the shirt comes off and you see my belly.

It’s hard to hide the belly with no shirt on!

But that’s the body I have today and it let’s me do amazing things, so I am grateful for that.

Thursday nights have become “spin the 50% off meat bin.”  Normally I meal plan over the weekend – for Saturday, Sunday, Monday, Tuesday, and Wednesday, and usually by Thursday I’ve just run out of ideas.

I lucked out on two counts – first off, I got a 2 pound block of Vermont cheddar cheese for $4.99!  Rhonda, can you believe it? 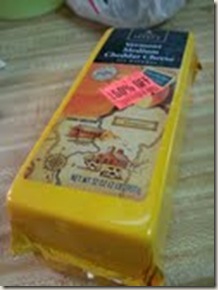 And they had pork shoulder blade steaks on sale – I got this package at 50% off the lowest price, so it was $1.33 for two pork steaks.

If you’ve never had this cut of pork before, look for it.  It’s super thin, so it cooks up in no time.  I just seasoned it with salt and pepper and some Greek seasoning and cooked it up on our indoor grill pan.

And a twice baked potato with that delicious cheese:

I ended up eating half the pork chop, and our dog got the rest with the bone.

Today is souper Friday!  I ended up making Iowa Girl’s Black Bean Soup, but I am adding smoked sausage to mine.  On the side I also made her cilantro rice to go with the soup.  Should be a delicious lunch

We got a couple inches of snow over night so I am off to scrape off my car.  Happy Friday – we made it!  Make it a great day!