Thanks for all the wonderful comments yesterday on My Bizzy Kitchen’s 5th birthday!  Even though it was a super busy day at work, I kept looking down at my phone whenever another comment was left – I felt the love.

So not having gone grocery shopping this week, it’s been . . . interesting.  I had half a spaghetti squash that was already cooked leftover in the fridge.  I usually just use it as the base for chili or pasta sauce, but I wanted to see what else was out there.

A quick Google search landed me at Half Baked Harvest.  I love it when I stumble upon a blog and instantly love it.  I am following her on Instagram too (halfbakedharvest).

So my idea for these spaghetti squash pancakes was to make them as a base for an open faced egg sammie.  I didn’t have very high hopes for this one, so I set the bar pretty low so I wouldn’t be disappointed.

I ended up doubling the recipe since I had two cups of spaghetti squash.

Mix everything together.  Melt half the butter for the first three pancakes (I also used Pam) and then the second half of the butter to pan fry the second three. 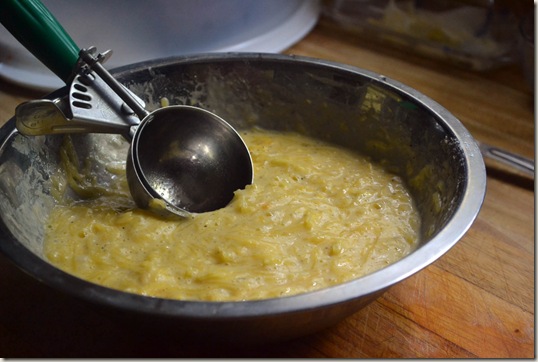 I scrambled 3/4 cup of egg whites with salt and pepper.  When I got to work I heated up the pancakes for 30 seconds in the microwave.  Then topped each one with two slices of deli ham.  Divided the scrambled eggs between the two and then topped with 1/2 an ounce of cheddar cheese and put it under the broiler until the cheese was nice and melty.  This plate comes in at 426 calories, 17 fat, 25 carbs and a whopping 40 grams of protein.  I didn’t end up eating lunch until 2:15 so this breakfast stuck with me. 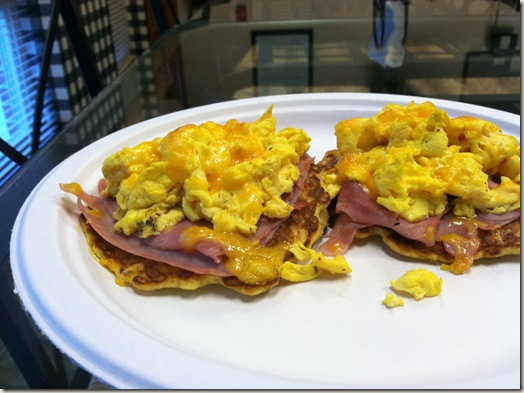 The verdict?? I loved these pancakes.  Just slightly sweet from the spaghetti squash, but with the mix of the salty ham and cheese – it was the perfect bite when you got pancake, ham, egg and cheese.  These are a keeper!

I ended up going to the gym late – not many people there at 1:30 in the afternoon!  Yesterday was legs and calves.  I am happy that I was able to increase my weight on every exercise but one.

And I have put my weight exercises on my phone so I don’t have to carry around a piece of paper anymore.  The first number is the weight, x 12 reps x 3 sets.  That took me 30 minutes.

I actually had . . . .canned soup for lunch!  I know, crazeballs.  I have no idea how long this has been in my pantry, but the expiration date is next month!

It actually wasn’t too bad – I added Tabasco to the broth to spice it up – but the whole can was only 200 calories.

And on the side I had a low carb spinach and cheese wrap – just 1/2 a cup of baby spinach, 1/2 ounce of cheddar and melted in the broiler.  It was crunchy and chewy at the same time. 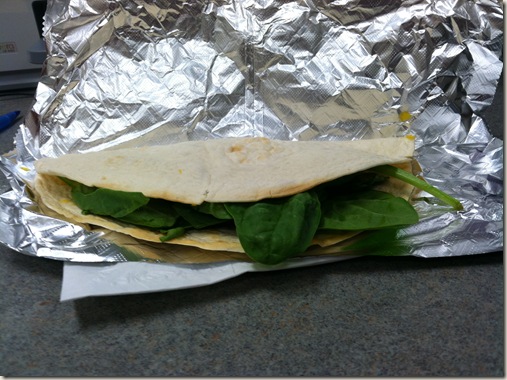 My sister doesn’t have Instagram on her phone because she’s got a Windows based phone – I like to send her pictures of my Instagram’s just to show her what she’s missing!  (are you following me??  biz319!)

This app is called “picplaypost.”  The picture of the weights is actually a video.

When I came home Tony was outside – it was such a nice night.  It was a long couple days of work, so wine won over Insanity. 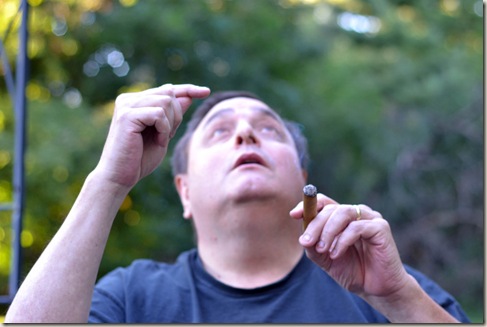 I had to work late the night before last so the bone in chicken breast I thawed hadn’t been used yet.  Tony asked if we had any tomato sauce and I said no, so yesterday he did a quick shop and told me not to worry about dinner. #love

He was making chicken cacciatore – and I had to really think about it, but I am not sure I’ve ever had it!  He simmered the bone in chicken breast with canned pureed tomatoes, olive oil, garlic and mushrooms and just let it simmer for a couple hours.  The chicken was so tender it shredded easily – the only problem was making sure all the bones were found!  Next time he wants to use dark meat so the bones will be easier to get out.  And next time he’ll add black olives.

We had leftover egg noodles so we threw those in the last few minutes.  This was so good!

Pure comfort in a bowl.  I had to guess on the calories since I don’t know exactly how Tony made it – but I put this plate at 571 calories.

Stats for the Day:

You still have until Monday to leave a comment for a chance to win Nicole’s cookbook!  The winner will be announced on Monday.

Alright, I am off to sauté some zucchini to go with Tony’s leftover cacciatore for lunch.  Happy Friday – make it a great day!