I hadn’t had a bagel in a long time and knowing starting tomorrow that I am going to be limiting my carbs for the month of April, I indulged in a bagel breakfast sammie – a delicious and filling 10 point breakfast. 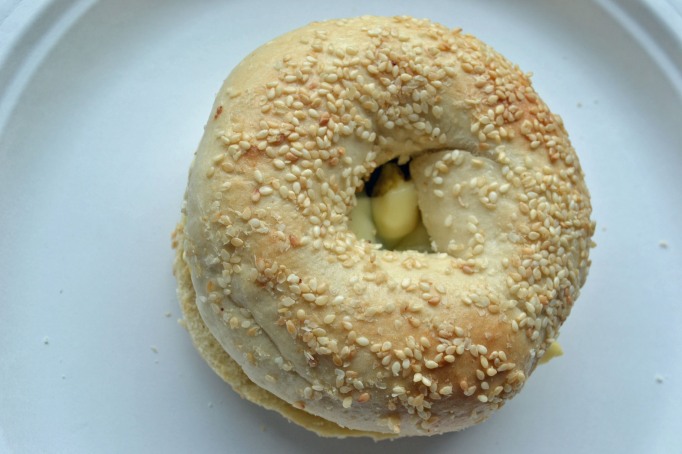 I had a couple errands to run at lunch yesterday – it was rainy and cold so I didn’t work out.  I ended up picking up Subway – the turkey and black forest ham on flat bread (only adds 10 calories and 2.5 grams of fat vs. the regular bread) with buffalo sauce.  Super filling and delicious! 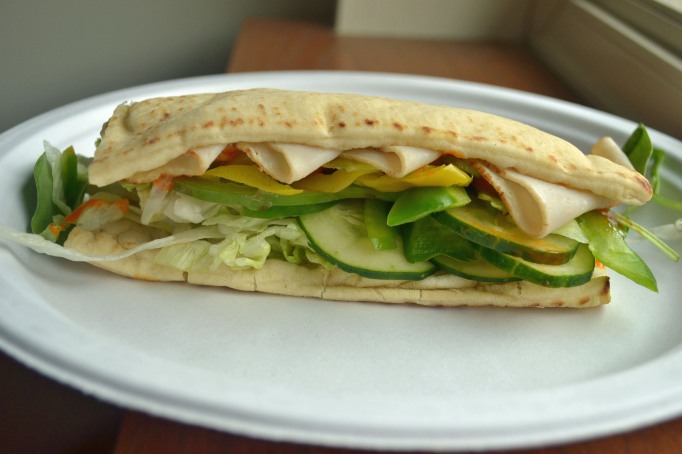 Since it was lent last night, that meant no meat for Tony.  The last couple weeks we’ve just gotten pizza, but Tony decided on Thursday that he would take care of dinner.   Mind you, he had to come up with something with what we had on hand.  And it being the end of the week and I haven’t done my pantry stock up in a while, he had to be a bit creative!

A few weeks ago I bought head on shrimp because they were $4.99 a pound.  I never did anything with them so they were in the freezer.   One thing we love to eat when we go out to our favorite Chinese restaurant is to get the sizzling shrimp.  Basically they bring deep fried rice to you in a bowl, and the server pours a flavorful broth with veggies over the top and once the broth hits the rice it starts to sizzle.

Here is another thing that makes Tony’s job difficult to work in the kitchen.  I hardly ever put anything back in the same place.  It even drives me nuts sometimes when I have to go into five cupboards, look in the pantry or downstairs in the basement where my overflow kitchen supplies are.  But he McGyvered and made rice on top of the stove since he couldn’t find the rice maker (fyi. . . the base of the rice cooker was in my downstairs fridge – still with the leftover yellow rice I made earlier in the week – oops!)

However, Tony made it healthy.  Instead of frying the cooked rice, he put a thin layer of rice in a cake pan and baked it in the oven until the edges got nice and crispy.  He used 2 cups of chicken broth, put the shrimp in the broth, shells and all and cooked it for a couple hours.  Once he took out the shrimp, he added veggies and cayenne pepper and pepper oil to the broth.  At this point, there was no way in hell Tony was even going to attempt to try it – way too spicy.

Holy cow, was this delicious.  The broth was super spicy, the rice was both crunchy and tender, and the zucchini and peppers were perfectly cooked.  Thanks for making dinner Tony! 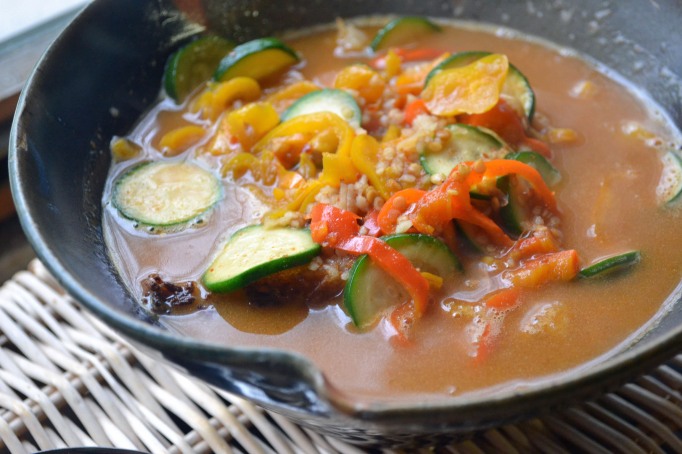 I still think I’ll be eating my yogurt parfaits for breakfast because they are so filling, so I needed to make some more granola.  I found this recipe that called for a fruit puree to be mixed into the granola before baking.   She suggested a fruit puree such as apple, pear or peach.  I really had no idea what exactly a fruit puree was so I googled “fruit puree recipe” and found that it is simply 1 pound of fruit, 1 tablespoon of sugar and 1 teaspoon of lemon juice.  Since I cleaned out both my upstairs fridge and downstairs fridge last night, I realized I had a bag of kiwi and a bag of watermelon that I froze for Hannah to use in her smoothies.

As luck would have it, I had exactly 1 pound of fruit between the two.  I nuked the frozen fruit just enough so that I could blend it.  I adapted the original recipe quite a bit with what I had on hand, and I reduced the amount of honey and brown sugar.  I haven’t figured out the stats yet, but I’ll update this post when I do.  You can see the flecks of the kiwi in the puree! 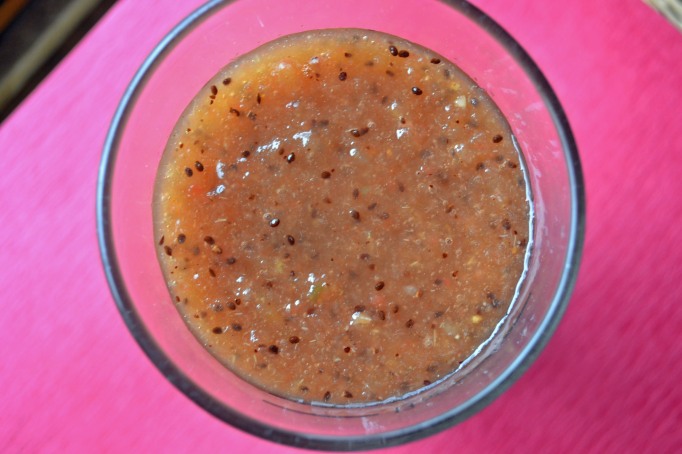 Heat oven to 300.  Mix the oats, Cheerios, cinnamon and salt together.  Mix the fruit puree, honey, brown sugar and oil together.  Add the wet ingredients to the dry ingredients.  Now I was a bit worried at this point because it was REALLY wet.  But I baked it for 20 minutes, stirred, and baked for another 25 minutes.  At this point the granola was still a bit damp, but it was already starting to brown and I didn’t want to burn it.  I let it cool completely, then added the cranberries and chocolate chips at the end.

Super crunchy, not overly sweet and will be an excellent topping to my yogurt parfaits.  Yum!

So are you wondering how my WI went?  Well, I didn’t go because I am switching days.  Since my “Operation Bad Ass” starts tomorrow, I decided to switch my WI to Sunday’s for the month of April.  I also think that I will like weighing in on Sunday’s.  Typically my Saturday becomes an “eat whatever” day because I feel I have the rest of the week to burn it off.

I also have a loaf of bread in the oven – it’s a new to me recipe – 3 cups flour, 1 teaspoon salt, 1/4 teaspoon yeast and 1 5/8 cup water.  The dough sits overnight, and right now it’s cooking in a dutch oven with the top on, and then the last 15 minutes you take the top off and it browns.  I’ll definitely post the recipe and pictures tomorrow if it works out!

It’s not too late to enter your BSI – pasta recipe.  Simply leave me a link to your pasta recipe on this post.  A winner will be picked on Monday, April 2!