I had totally forgotten that I had tried to make baked paczki (“poonch-kee”) two years ago, until I saw that post got 100 hits yesterday!  They were just okay, but I may have to try them again next year. 😀

Since I didn’t do anything traditional for fat Tuesday, I had to drool over my friend Jacky’s shrimp etouffee – holy cow does it look delicious – I’ve never made it before but now its on the top of my list of things to make – thanks for posting the recipe Jacky (and check out her blog – she just got a new layout and it is so clean and nice – love it!).

For breakfast I had one of my 4 point bagels with 1/2 cup egg beaters, baby spinach, deli ham and cheese – there was too much egg to fit on the mini-bagel so it kinda spilled over – 7 Points.  Marisa made the bagels too – except she made hers whole wheat – you can check out how good they turned out here.

Back at the office I had a Thai noodle bowl.  I followed a recipe, but it was awful, so I had to do some quick changes to make it taste good.  Have you ever used fish sauce before?  Wow, that is some strong stuff!  So I don’t have a recipe yet because this is still a work in progress – but my co-workers that I brought it too loved it, and I did too.  I sauteed the zucchini in szechwan sauce so it had a nice kick – this whole bowl is 9 PointsPlus. 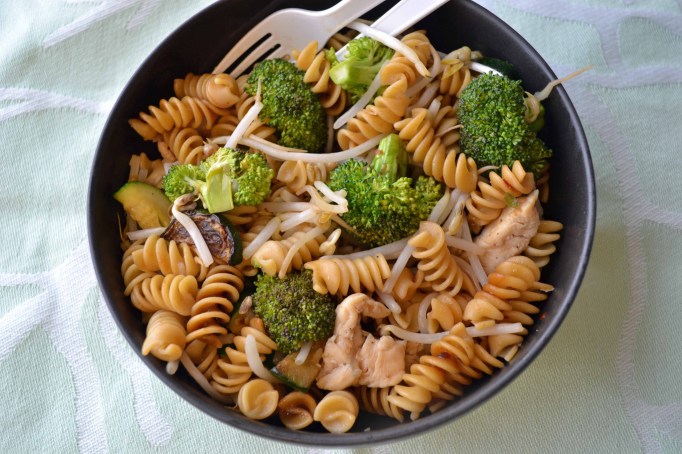 And I had a cup of cantaloupe on the side – this one was so sweet. 😀

So Tony is still not feeling that great.  It seems like he goes two steps forward and one step back, which apparently his surgeon thinks is normal.  It’s just sad that I can’t make him feel any better.  He only ate half a roast beef sandwich before he started to feel sick.  So needless to say, he had no appetite for dinner. 😦 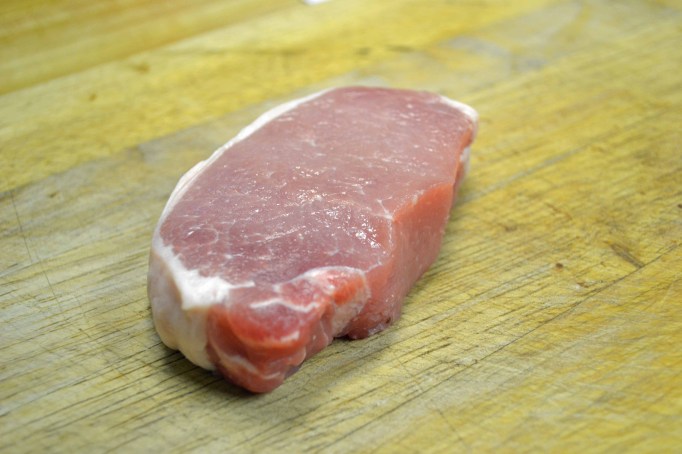 heaven on a plate

I cannot describe how delicious this pork chop was.  It was perfectly cooked, and the sauce was nice and tangy – I actually put 1 tablespoon of Dijon mustard in the sauce, which almost was a bit too much, which is why I reduced the amount to 1 teaspoon in the recipe above.  This one is definitely a keeper!

It’s another overcast, rainy day in Chicago – but the only thing that makes me happy about that is hopefully by today the last of our dirty, ugly snow will finally melt!

Have a great day!