The sun was shining on my way to work yesterday. 😀  The sun just makes me happy in general, no matter what the temperature is.  Happily we had temps in the 40’s yesterday – so weird this close to January!

And the geese were all over our parking lot at work! 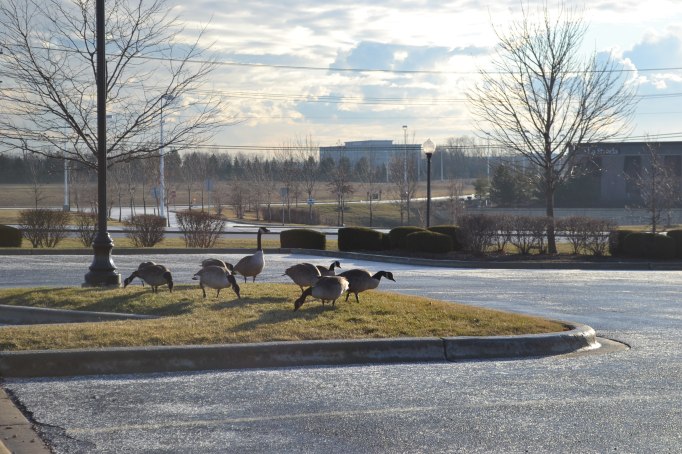 It was my third and final day of the broccoli bacon bake, and I don’t think I can eat the final serving – maybe it will freeze well?   This time with leftover steak from the kabobs the other night and a tangerine from my PIL from Florida – it was so juicy and delicious!  Breakfast comes in at 10 points.

With the sun shining, I couldn’t wait to get outside at lunch.  I ended up doing a 5 minute warm up walk, 35 minute run and 5 minute cool down.  Glorious!

I couldn’t wait to get back to my desk because I had Tikka Masala Soup on the menu.  Holy shizz you guys – this was SO spicy flavorful!  I found a new blog that is right up my alley – um, its called Soup Addict!  They had a recipe for tikka masala soup with shrimp, but it had direction with raw shrimp.

I had made perfect shrimp cocktail over the weekend, but we never ended up eating it on Christmas Eve – so I adapted my recipe from her tikka masala soup using what I had on hand.

Put everything but the shrimp and cilantro into a stock pot and simmer over medium low heat for 20 minutes.  Using a stick blender, blend until smooth.  Divide the shrimp among four bowls, divide soup over shrimp and garnish with cilantro. 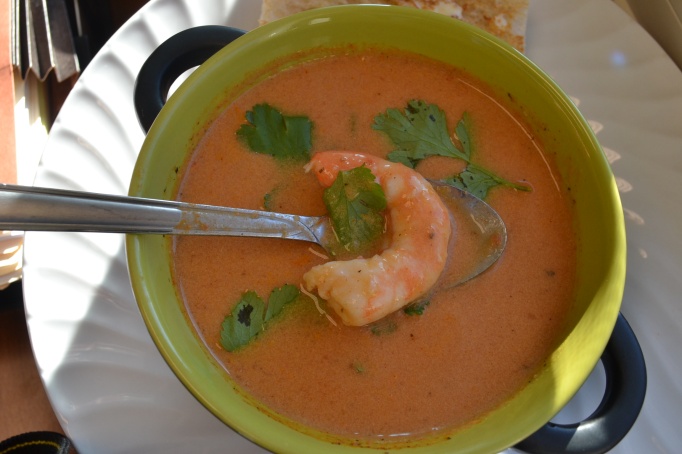 This picture doesn’t do it justice.  It may seem like a super simple soup, but it is so complex in flavor and the epitome of a spicy yet flavorful soup.  This one is definitely a keeper. 😀

I didn’t really have anything planned for dinner last night since we had so many leftovers.  I ended up having a bowl of my beef and bean soup with some tortilla chips on the side – I actually think the flavors developed even more being in the fridge.

Tony and I watched about 4 episodes of Shameless last night on Demand – does anyone watch that show?  I think its on Showtime with William H. Macy.  It’s really well done.  I slept in until 9:30 this morning!  And I realized that tomorrow is my WI at WW – hopefully they are open on New Years Eve!

With it almost being the new year I have plans to organize this weekend.  I need to do a deep clean of our bedroom (i.e. move the bed and vacuum under there!) and I need to purge clothes I haven’t worn in a while.  And get rid of my size 14 pants.  I wore a pair of pants yesterday to work that were a size 14 and I didn’t even have to unbutton them to go to the bathroom, I could just pull them down!

Hope all of you have today off too!  I’ll be back for my WI tomorrow – make it a great day! 😀