I adapted a recipe from Cook’s Country, only due to the size of our roast, which was 3 pounds.

Pat roast dry with a paper towel – make sure its good and dry.  Heat 1 tablespoon of the oil in a dutch oven to medium-high heat and sear the meat on all the sides.  It will take about 10 minutes total.

Add onion (you know the drill – not!) to fat in skillet and cook over medium heat until soft, about 5 minutes.  Stir in garlic, flour, and 1 teaspooon of the spice mixture until fragrant, about 1 minute.  Now stir in all the liquids and using a wooden spoon, scrape up all the bits on the bottom of the pan.  Bring to a boil, then pour into roasting pan.

Stir remaining oil, pepper flakes, and salt to remaining spice mxture.  Rub mixture all over the meat and roast until meat registers 125 degrees.  Remove and tent with foil for 20 minutes.  Now the reason for adding oil to the rub mixture is to prevent the herbs from burning while in the oven.

Pour the jus from the roasting pan through a strainer and serve along side sliced roast beef. 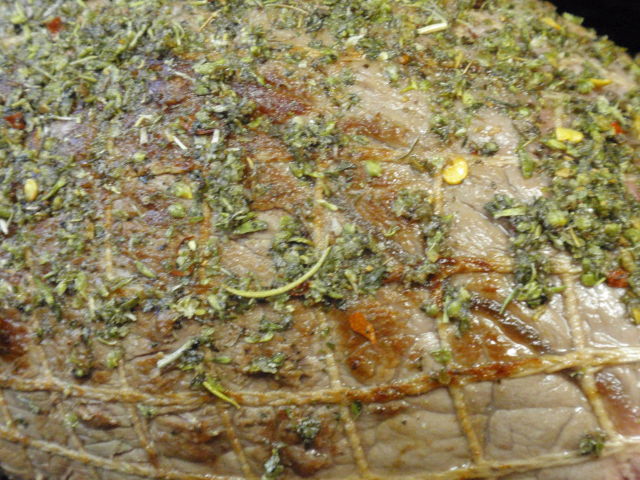 here’s applying the dry rub after searing the meat

Just out of the oven, ready for its 20 minute rest

Which will make the perfect cheezy beef sandwiches later this week: 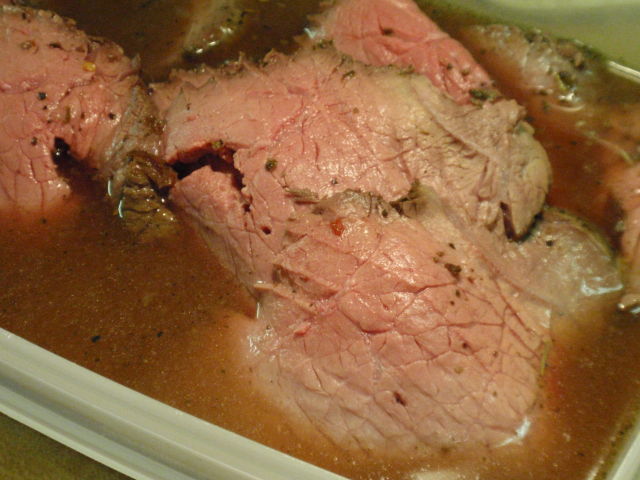 just hanging out in the leftover jus – which I thought might be too salty, but its not – whew!

Okay, so earlier today Tony and I were watching the F word – a show on the BBC channel.  In that episode, Gordon Ramsey has a cook off and they are making cheesecake.  I always thought cheesecake was a refrigerator cake, but Tony disagreed and said that they are always baked!   So I’d like to take a poll:

Tonight is the last night to comment on my giveaway!   The winner will be announced in the morning.  I am off to watch Biggest Loser!  (and American Idol.  Oh, and Chopped on FoodTV!)